Fate was a game that I tried for the longest time to get, in its Spirit of the Century incarnation – seeing as it was similar to HeroQuest ( a game I learnt out of necessity when I was a die hard Glorantha fan ).

I guess  I was put off by the writing since I like short direct rulesets. Then I jumped on the Fate 3 Kickstarter, went “aha I’m beginning to get this now” after reading Fate Core but was put off a bit from its Tool Set approach ( a style of gaming which I had I came to hate from playing a ton of HeroQuest).

But through sheer bloody mindedness, I sorted out a “Cowboys vs Dinosaurs” game using Fate Accelerated (which for me cut the crap and got down to the bare necessities of the system) and with a group that was a bit more knowledgeable about the base resolution system from playing it at conventions. Finally saw it sing in play after about 5 sessions! I started at this point to want a bit more flesh on the bones – especially about having Powers and Talents.

So I started eyeing up Fate Cores Extras rules. It was at this point my friend Paul Mitchener came up with his 10 page version of Fate called “Fortune” (which in itself borrows some key ideas from a game called Jadepunk, with permission from its author) for his Historical Gaming Patreon . Fortune has Professions, broad skill groupings which sings out to my old Chaosium Basic Roleplaying side , which replaces FAE ‘s Approaches and Fate Core’s Skills, flattens the Stress track (so no more fumbling about thinking “I’ve taken 3 wounds, which box do I tick off” now it’s a more deadly “‘I’ve taken 3 wounds, tick off two boxes”) and an Extras system that handles not only mundane talents and supernatural powers, but also advanced professions (so, for example, you might have a Soldier as a profession then Legionary as an Extra, which gives you bonuses for the extra training and superior equipment. System wise it sticks to the core Actions & Challenge systems and doesn’t over expand from there (I can look to Fate Core or makeup stuff if I want more). Overall it helps that Paul sees Fate as a much more traditional game than some of its fans present it as.

I liked the system so much I teamed up with Paul and we released “Hunters of Alexandra” together, a A5 sized pick up and play game (literally you could be reading it on the way into work and be playing in the evening (it has a straightforward adventure + pregens).

Fortune has become my go-to system for Storytelling games, and I’ll be publishing more for it next year – for example, I’m currently putting together my Cowboys vs Dinosaurs game as the Hollow NWest , a small game about Modern Day Conspiracies called Lost Fools of Atlantis and Paul’s working on something for it too. 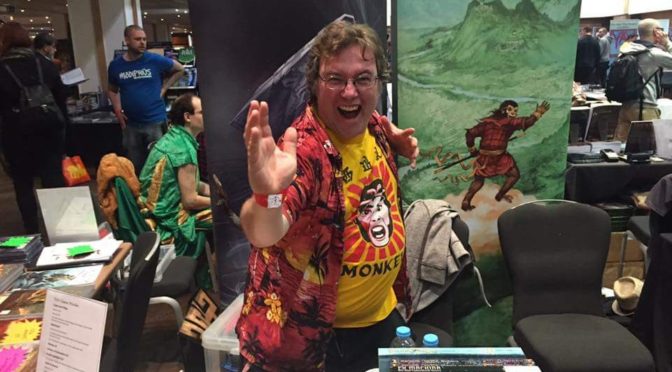 So Dragonmeet 2016 was my first visit since I last went in 2006 when it was held in the rather dour and downbeat Kensignton Hall. This time out it was nestled in the heart of Hammersmith at the Novotel. I didn’t initially appreciate shinyness of the venue, since we came up with the stock in the goods elevator and were initially focused with getting set up in the trades hall, where I spent 85% of my time.

To any of you who swung past the D101 Games stall, tucked away in the corner next to Leisure Games, and said hi thank you. Apologies if you’ve seen me before at Expo and I didn’t recognise you. There were a few lulls but it was full on from its start at 10am until finally we got the signal from the organisers that we could shut up shop at 6pm. There were audible sighs of relief from the traders around me as people realised (we had originally been told 8 was the earliest).

Overall we turned a profit, as we do at Expo as well,  and I’m finally getting real grip on what sells and what doesn’t. I’ve now got a couple of years of hard data from Expo and with the figures I got from Dragonmeet a very definite picture is emerging that I’ll be taking action on next time I’m out with the stall (Airecon in Harrogate 10-12th March).

The con was a ton of fun. Perhaps too much fun for one day. Not only were sales good for us, but I got to talk to lots of customers about the games – especially Monkey which I was letting people know that the Kickstarter starts on Sunday 8th January 2017.  I say quietly, well it was until official Monkey #1 fan Lloyd found out and was busy telling people, including at the “What’s happening in Indie and Story games seminar”.  I wondered why sales of Monkey spiked late afternoon 🙂

That vague thing called “Networking” with fellow industry types also worked nicely for me. I’m usually not a big fan of putting myself forward, I prefer to let the work speak for itself, but I had some good chats  with various folk that were inspiring and useful.  Not least with Mike from Leisure Games, Ben and Mark from Airecon (which is having its next outing in March in the Harrogate Conference centre and D101 will be involved heavily on the RPG front so watch this space) and I had the pleasure to meet industry veteran artist Tony Hough and leaf through a folder crammed with gorgeous fantasy art.

Surprisingly there was enough time to be sociable either side of the con. Despite arriving late on Friday me and my driver Steve got to go for a cracking Vietnamese at SaigonSaigon not far from Premier Inn where we were staying before getting stuck in a lift in the apartment block were the rest of our friends from the North had their accommodation. Stoically we waited it out for an hour, heads down reading on e-readers, until we were got out. Then a nice bit of booze was provided by our hosts to calm nerves (cheers Lynn and John).

After the con I bumped into the London Gloranthaphiles (Colin, Tressey, Dan, Gwen and Nick) and went out for another oriental themed tea, where I discovered the clean tasting delights of Lucky Buddha beer ( with its lovely happy buddha shaped green bottles – which I was too polite to take one) . Then back to the hotel bar to meet up with my Northern mates for more beer and spirits, before calling it a night.  Then a clear run back to the North the next day.

Would I be back again?  Yes on balance, it was a fun, profitable and inspiring enough for me for me to come back.