So Furnace is coming up and its time to organise the D101 stall for the con, or not as the case may turn out.

This year I’ve popped my cheery well and truly on the selling front, from two cons.

Con-Quest (Derby May)
On the surface this looks like Dragonmeet in the Midlands, in fact it was originally going to be DM-Midlands. A one day con. There’s a mini-trade area where Mongoose and House Attitides were set up and then the main hall where trade stalls of various types not all rpg (we were in-between a CCG stall and a stall selling Pagan items) where there was also Leisure Games and a bring and buy stall. 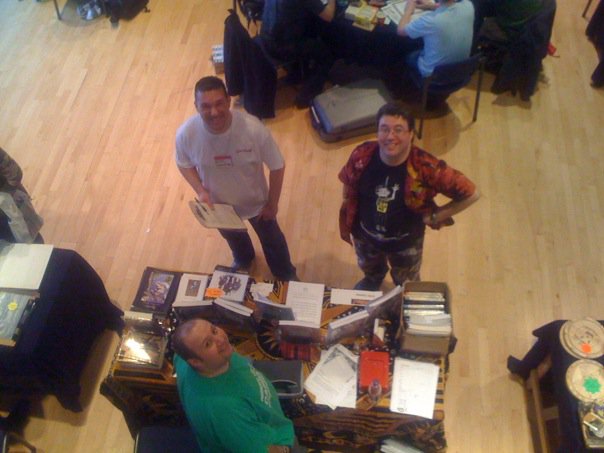 Short story here is that the gamers, despite the abundance of trade stalls, were there to game. Even Mongoose left early. I felt like a total lemon, while the D101 Demo team ran full games and had a grand time, I made two sales (fortunately enough to cover the cost of the stall) all day and went home will practically all the stock as a result.

Despite all our attempts to trap what little passing trade there was, interest in the stall was virtually zero

It should be noted none of this is down to the very fine efforts of the organisers, who put on a very well attended excellent first con, but more from the fact that I was physically distanced from the customers who were busy gaming in the centre of room. I realised I would have been better off running games and having a selection of them in my bag with a cash tin if people wanted to buy…which lead

Continuum (Leicester July)
Very different set up here. Although Continuum has a similar foot fall (about 200), its a 2 day residential con. Learning from the mistakes made at ConQuest, I put the stall firmly in the room that we had for gaming, we had 2-3 tables on the go in all slots. I called the stall the ‘Magic Stall’ because it magically appeared in-between slots, and was ‘closed’ while I was running games. Initially the stock was packed up when it was closed, but by the end I left stuff out for people to browse.  As you can see from the photo, the Magic stall is less of a barrier but more of an open feature.

Here’s the Magic stall front on: 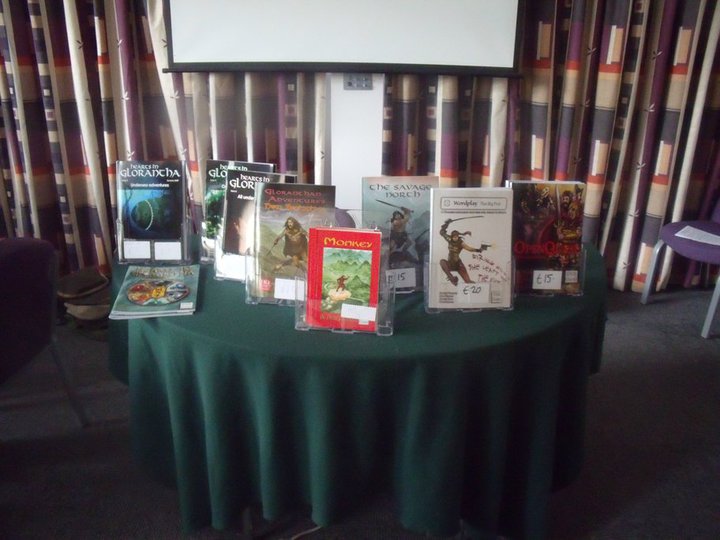 and here’s it side on with customers browsing it 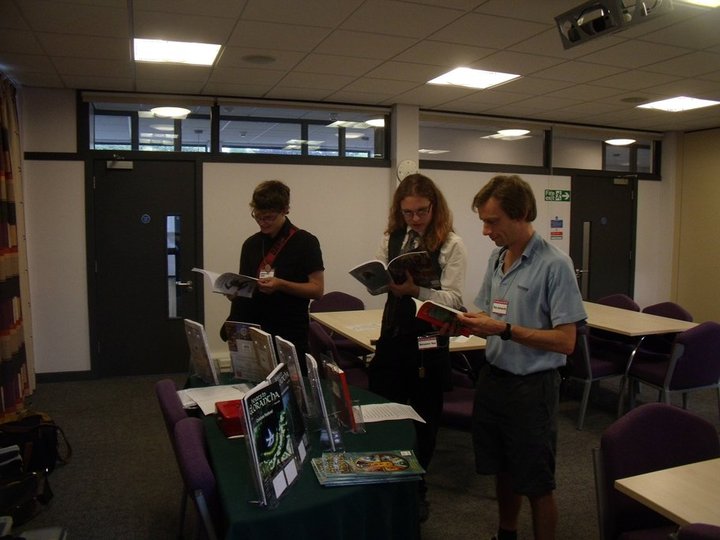 This worked great guns, contact with the customer was easily made. The only change I would make for next time would also to have a ‘breakfast’ Magic Stall that appeared at the edge of the Dining hall, after I had my breakfast (I’m an early riser). This is what Leisure games did on Saturday and they where doing great trade at 8:30-9 as people had just finished breakfast.

Another thing I did was try out the man with games in his bag approach – Monkey you see fits in my man bag along with the cash box – and this worked very well since people know me well enough at Continuum to wander up and ask for a copy. This ease of access also led to sales of books that were upstairs on the Magic Stall in the Games Room as well. Because I had copies with me at all times as soon as someone asked me about the game I had something to show and sell. As a result I literally was selling Monkey up until the moment I left the con!

So for Furnace I’ll definitely be repeating the Continuum set up of the Magic Stall and Man-with-a-game-in-his-bag , with some tweaks.